• 17th-20th March 2022 Performance of Hiraeth am nefoedd by American guitarist Trevor Babb at the 21C Guitar Festival 2022 in Indiana, USA.

• 17th February 2022 Performance of Three Words for Light at the Helicon, Seamus Heaney Homeplace, by Martin Johnson and myself on electronics. I will also perform the first movement from Eyewitnesses of His Majesty on the guitar and a premiere a new piece written for me by Argentinian composer Martin Della Vecchia. Tickets available from Seamus Heaney Homeplace.

• 18th December 2021 Cross-Purposes for duo and electronics received its Thailand premiere at the Thailand New Music and Arts Symposium in Bangkok.

• 16th December 2021 Three Words for Light for cello and electronics performed by Martin Johnson at the CMC in Dublin at the Irish launch of my album.

• 8th October 2021 Ceaselessly into the past for piano premiered by Cahal Masterson in The Sonic Lab, Belfast, at my debut album launch.

• October 2021 Ceaselessly into the past broadcast for a Hugh Lane Gallery Series Concert.

• October 2021 Ceaselessly into the past broadcast on Lyric FM as part of the Limerick Castleconnell series.

• 17th September 2021 one movement from Three Words for Light for cello previewed by Martin Johnson at the CMC Ireland for Culture Night, Dublin.

• 13th-15th August 2021 Cross-Purposes for duo and electronics part of an installation in the Butler Gallery for the Kilkenny Arts Festival.

• May 24th 2021, On a Stone Pillow, Jacob dreamt of Salvation recorded by Isabelle O’Connell in Mount Vernon, New York.

• May 23rd 2021, If ye love me premiered at St. Pancras Parish Church, London as part of the London Festival of Contemporary Church Music. Link.

• May 5th 2021, Notation in Sibelius clinic for Musician’s Union.

• April 15th-17th 2021, Eyewitnesses of His Majesty recorded by Chris Roberts in Abergavenny, Wales, for release on my upcoming album.

• April 15th 2021 Cross-Purposes for cello, clarinet, and electronics recorded by the CRASH Ensemble.

• Apr 10th 2021, The Union is our God premiered online by the London Symphony Orchestra. Link here.

• Mar 2021 Woolgathering recorded in Australia by Ensemble Offspring for a release on the new ICC label.

• Feb 2021, Ceaselessly into the past recorded by Cahal Masterson in Mercia, Spain, for release on my upcoming album.

• Feb 27th 2021, Building the Tower, for narrating pianist, performed in New York City by Adam Marks, as part of a series of pop up concerts (Musical Storefronts) run by the Kaufman Music Center.

• Feb 13th 2021, The Union is our God for the LSO recorded in St. Luke’s London. With lighting by Laurenz Theinert.

• Feb 5th 2021, I thirst to be premiered online on YouTube, recorded by the composer and family members.

• September 26th 2020 re-orchestration of Laniakea for small orchestra premiered in Coole Park, Galway as part of the programme for Galway’s European Capital of Culture 2020.

• May 4th 2020, Scamper for solo clarinet broadcast on BBC Radio 3 three times as part of the lockdown postcards from composers series. Performed by Francesco Paolo Scola of the Ulster Orchestra.

• May 2nd 2020, performances of Crossing the Firth and Stutter at the MUSLab 2020 International Festival of Electroacoustic music in London’s Icklectik Art Lab. Cancelled.

• February 28th 2020, premiere of Shards on a Beach by William Cole of the Ulster Orchestra.

• January 24th 2020, premiere of Tearing as it is Woven by the Chamber Choir Ireland.

• December 17th 2019 Children, the wide world over performed in a carol service by Elmgrove Primary School.

• December 14th 2019 Sparrows’ Anthem for the Altnagelvin Hospital Choir, for choir and oboe, in the Guildhall, Derry/Londonderry.

• December 12th 2019 Premieres of Circle Machines and Where I go, I hear the noise at the Contemporary Music Centre Christmas Party with PANIC Music Ensemble.

• December 11th 2019 Children, the wide world over premiered in a carol service by Elmgrove Primary School.

• July 25th 2019, Hiraeth am Nefoedd, commissioned by guitarist Chris Roberts, released on his upcoming solo album, Adra and performed at the album launch in Ty Cerdd.

• May 21st 2019, Shards on a Beach for double bass and electronics workshopped by William Cole of the Ulster Orchestra.

• May 4th 2019, Publication of Annunciations: Sacred Music for the 21st Century, a new book edited by George Corbett about the Theoartistry project, for which I have contributed a chapter.

• March 20th 2019, I presented a paper on my work at the Contemporary Approaches to Music Composition – Practice as Research symposium at Dublin City University.

• February 27th 2019, Five Scenes from a Retro Viewer premiered by the Ficino Ensemble in Dublin.

• February 17th 2019, the Hard Rain Soloist Ensemble perform Perelandrian Drift for the second time at the SARC building in Belfast.

• February 6th 2019, Crossing the Firth premiered at the season launch concert of the Irish Composer’s Collective.

• January 10th 2019, Enturfment workshopped by members of the Ligeti Quartet and the Gildas Quartet as part of the BFE/RMA Conference in Sheffield, where I will also be presented a paper.

• December 1st 2018, A Slave in the Land of Liberty for mixed choir and soloists performed by the C4 Composers-Conductors Choir in Manhattan, New York.

• November 23rd 2019, PANIC Music Ensemble (of which I am a founding member) premiered two of my pieces The Shy Man for baritone and piano (2015) and Threads and Ribbons for baritone and guitar (2018).

• Nov 1st 2018, Anthem For Doomed Youth performed by the Belfast-based Cantiunculae choir (who commissioned the work) as the centrepiece of a concert commemorating the centenary of World War I, conducted by the composer. 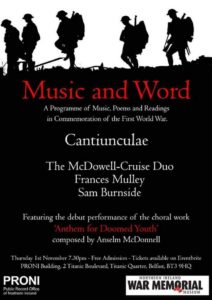 23rd May 2018 Selected as a finalist for the 3rd International Sergei Slonimsky Composition Competition, Moscow, Russia. My work ‘Sir, we wish to see Jesus’ to be performed by the GAMEnsemble. Concert programme.

22nd May 2018 Horn piece performed by Andrew Budden and filmed at St Michael’s, Manchester, as part of the Psappha Composing For Horn Scheme 2018.

14th March 2018 ‘Dancing While Others Sleep’ premiered by Ficino Ensemble at the Ulster Museum as part of Moving On Music ‘Night Music Series’.

26 May 2017 ‘Sir, we wish to see Jesus‘ for flute, cello and piano, written for and premiered by the Marsyas Trio. Vale of Glamorgan Festival, Cardiff University School of Music.

August 2018 Japanese premier of two of my guitar works performed by Rosetta Contemporary Ensemble.
Eyewitness of His Majesty: – I Bartholomew, the Scholar, – VI Judas, who betrayed Him.