Thomas Devin Reilly (1823-1854) was a journalist born in Monaghan and trained at Trinity College, Dublin. As a member of the Young Irelanders, a political and social movement for Irish nationalism, he was involved in the failed Famine Rebellion of 1848. He was forced to flee to Fermanagh, and then eventually sought refuge in the United States, from which he never returned. The text of this piece is taken from the letter Reilly wrote to his friend John Kelly, shortly after his exile began. In the letter, he expresses his home-sickness, his solitude and disillusionment in the ‘land of liberty’, and also reflects on the dangers of emigration.

I have selected text from the letter relating to three of Reilly’s experiences: his reflection on his experience in America, his account of the turbulent storms encountered on his voyage, and finally his nostalgic reminiscence of the day he left. These are tied together by his refrain ‘Dear John’. By using this phrase, the piece plays slightly on the idea of a ‘Dear John’ letter; a correspondence where an intimate relationship is severed (in this case by necessity rather than infidelity). The connection broken here however is not between lovers, but between a man and his home-country: the Ireland Reilly longs for. The eloquent description Reilly writes of his migrant experience is powerful, poignant, and resonates with the experiences of many in our world today. 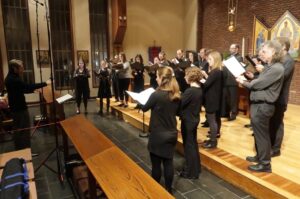 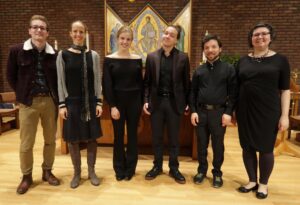 I hear the noise

If ye love me

Tearing as it is Woven

A Slave in the Land of Liberty

What Can I Say?